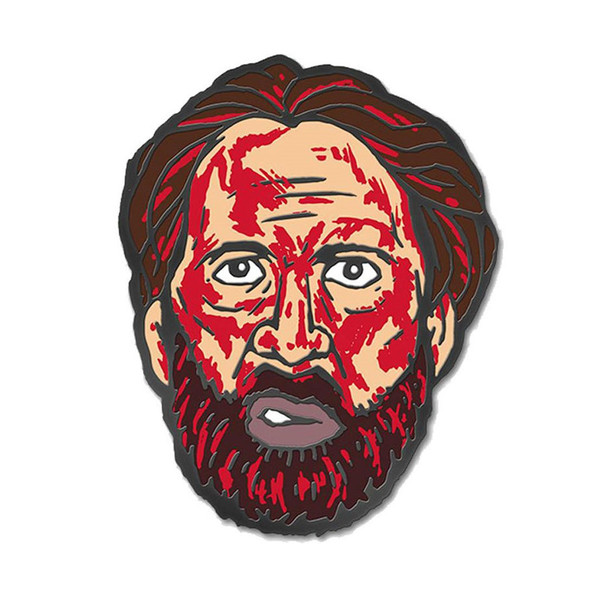 This is a bloody good pin any diehard fan of the 2018 psychedelic horror film Mandy is sure to reach for. Made of black nickel metal with a hard-enamel silkscreen finish, the Mandy Red Miller Head Pin measures about 1 1/2-inches wide and features the battle-damaged face of actor Nicolas Cage in his role as Red Miller. Two black rubber clutches hold the pin in place. Add this to your attire and there will be no doubt where your fandom lies!

Mandy premiered at the 2018 Sundance Film Festival that included a Legion M-hosted panel where the film's star, Nicolas Cage, made a surprise appearance. A psychedelic horror film directed by Panos Cosmatos, produced by Elijah Wood, and co-written by Cosmatos and Aaron Stewart-Ahn, it also stars Andrea Riseborough, Linus Roache, Ned Dennehy, Olwen Fouéré, Richard Brake, Bill Duke, and others. In the movie, the enchanted lives of a couple in a secluded forest are brutally shattered by a nightmarish hippie cult and their demon-biker henchmen, propelling Cage's character into a spiraling, surreal rampage of vengeance.